There are not only myths about Ancient Greece

Myths about the specifics of Bluetooth 5

Myth 1: Specification of Bluetooth 5 is not compatible with legacy Bluetooth devices

The strength and beauty of Bluetooth 5 are that it ensures full compatibility with Bluetooth devices 4.0, 4.1, and 4.2. Another additional advantage is that you can apply on Bluetooth 5 and use all the features of the old Bluetooth basic specification. For example, to use the optimal set of functions for the device that you are developing, you can increase the length of the word data from Bluetooth 4.2, combined with the high speed that Bluetooth 5 provides you. 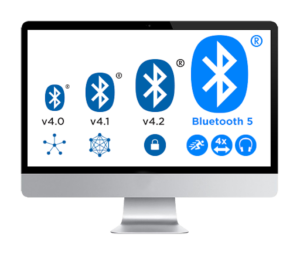 Myth 2: Bluetooth 5 has a faster speed and longer reach point

One of the biggest errors with Bluetooth 5 is the statement that users can work at 2 Mbps with extended coverage. This does not correspond in any way to the real situation. Characteristics such as high data rate and high coverage are two antagonists. You have to evaluate and make an informed, more important choice by yourself – speed or communication range, as the device cannot provide both at the same time. For example, in order to achieve maximum coverage, you will have to sacrifice the percentage of data, which in this case falls to 125 kbps.

Myth 3: A wider range of Bluetooth 5 coverage is achieved by increasing the output power of the radio transmitter

A great advantage for appliances that provide a wide coverage area is certainly the absence of an increase in energy consumption. Using the encoding of PHY data sensitivity of the receiver is improved by maintaining the same current in both transmission (TX) and reception (RX) modes, compared to Bluetooth 4.0, 4.1, and 4.2. The reason for this is that Bluetooth 5 uses Forward Error Correction (FEC) technology, which eliminates the need to retransmit data when there is a high level of external interference. This method makes it possible to detect and correct errors on the receiver side, instead of requesting packet retransmission, as was in the case of Bluetooth 4.0. In this case, the extension of the data bit encoding from 1 to 2 (a logic is represented as the “10” sequence) or from 1 to 4 (represented by the “1100” sequence) is used. In this case, the transmission speed of the data is reduced to 500 kbps or 125 kbps respectively, but this allows the receiver to distinguish and isolate more easily the useful information signal in the background of noise and interference.

Bluetooth 5 has been announced at the launch of the market as a device that improves wireless communication and interoperability. This statement may be misinterpreted to mean it is something that improves data transfer with Wi-Fi devices. In fact, we only have an improvement in performance with other nearby BLE devices. The random switching technology used in Bluetooth 5 reduces the probability that a nearby BLE device will simultaneously transmit on the same RF channel, thus increasing the overall reliability of a separate wireless connection.

Myth 6: In high-speed mode, the transmission speed increases as the time between packet transmissions

Another fundamentally wrong idea about Bluetooth 5. In fact, it’s not. Historically, for BLE, the transfer rate was limited to a data rate of 1 Mbps. And Bluetooth 5, doubles up to 2 Mbps. This means that it only takes half the time to transmit data packets, but the time interval between the packets is maintained constant.

Myth 7: A 2Mbps connection has the same coverage range of 1 Mbps

When used with Bluetooth 5 at a data speed of 2 Mbps, compared with 1 Mbps, there is a decrease in the sensitivity of the receiver. Thus, a higher data rate reduces the coverage range from 1 Mbps. The loss of coverage is offset by a more advanced radio channel architecture than the first BLE devices. Thus, even compared to a device that uses Bluetooth 4.0 protocol, radio communication with Bluetooth 5 at a speed of 2 Mbps will have a significant increase in bandwidth for applications located at the same distance.

Myth 8: Bluetooth 5 devices can be connected directly to 2Mbps

It’s not true. The two Bluetooth 5 devices must first establish a 1Mbps connection and then switch to 2 Mbps mode. This device-to-device exchange tactic is similar to the above-mentioned function of extending the length of the data package to Bluetooth 4.2. Functional pairing gives the flexibility to dynamically change the baud rate according to the requirements of a particular application and provides compatibility with BLE devices that do not support the high-speed function.

Myth 9: Creating a long-range Bluetooth 5 connection should be of short duration

If that were true, it would be a significant limitation! Fortunately, with the specific Bluetooth 5, a device can start a connection and connect at a long distance through the so-called advertising extension (aka advertising extension), where every packet transmitted, in the case of packet transmission, is intended to be received by all participants in the network. The unloading of advertising channels and the operation of data links offer more efficient toll connections and significant benefits when used where coverage is critical.

Myth 10: A long-range device can communicate with a smartphone that doesn’t support Bluetooth 5

Myth 11: BLE is only for networked applications

Keep this issue important for the future, we remove the mystic veil from BLE applications. Immediately after the creation of BLE technology, a stereotype appeared that it was intended for personal networks with a focus on portable electronics (literally portable, wearable English, that is, put on yourself) and fitness trackers. With the advent of Bluetooth 5, these barriers are breaking down as technology extends to retail, domestic, industrial, and automotive applications. The notion that coverage is possible here, we will say, only within the limits of a room is now a thing of the past, since connections are now possible throughout the house.

Bluetooth 5 helps to expand things, places, and connected vehicles. From industrial sensors to keys that replace car keys, BLE enters the most innovative spaces. At the moment, we can just fantasize about all the many new applications where developers will use Bluetooth 5 technology in the near future.